Fallout 76, the latest in the franchise, but has it changed or is it still the same and worth the time? As the latest in a franchise of relatively great games, one has to wonder if the game has changed at all or if they just released the same thing with a new storyline. This review will cover everything about this game, including what is new and what is the same, moreover, the price, platforms and so on will also be discussed. Everything there is to know about the game to help you decide if you want to play it.

The game includes blood, bodies, monsters and a lot of graphic violence, hence the reason for the high age restrictions. The developers of the game try to make it as real as possible so there will be loads of blood and blood spatter, also other things that might be considered violent.

The game has a very high violence rating due to the extreme violent graphics present in the game and so forth. Not only can one expect to find corpses, but also severed heads, dismembered bodies and so much more. There is furthermore, the “romance” side of the game where players can flirt and eventually have sex. Not a lot is shown, however, as characters can only be undressed to their underwear and not much else. The “making Love” scene does not show much either as the characters are in bed and once they get out, they are fully dressed. 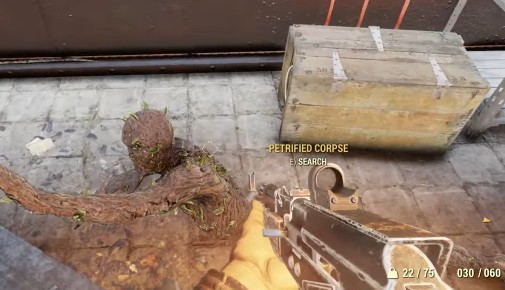 Yes, to all. Fallout 76 does include foul language, drugs and a ton of weapons. Not only does the in-game language include fouls speech such as s**t, f**k and so forth, but the players can smoke, drink alcohol and use a bunch of different drugs throughout the game. Drug dealers, junkies and so on can also be found through the entire game.

The player of the game can choose either first or third person camera angles, however, most people make use of the first-person shooter as it is the easiest way to play the game.

There are no in-game parental control settings. Do keep in mind that certain scenes in the game can be distressing to some players.

What Does it Cost?

Fallout 76 has to be purchased before one can get the access needed to download/install the game and to play, however, there are different prices associated with the game. The price you pay will depend on a few things like the platform it will be played on and what version of the game you will be playing. There are furthermore, additions to the game which will also affect the price you pay. With all of this in mind, you can expect prices anywhere from $59.97 and up.

One can also buy in-game currency which can be used for a lot of things like upgrades and so forth.

On What Platforms are Fallout 76 Available? 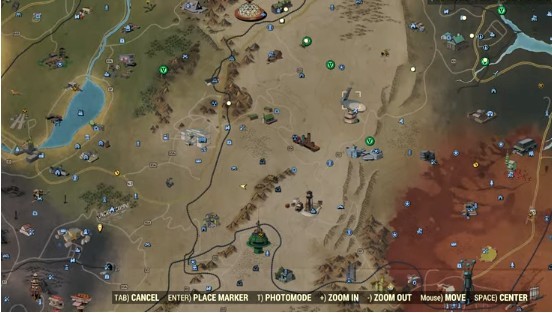 Fallout 76, like the rest of the franchise, is a story based game where one has to complete missions/quests in-order to further the story. With Fallout 76, the player character was locked in a vault to survive a “nuclear war” and afterward they are sent out to rebuild, however, everything is not as it seems. Because of the complications, the player has to complete several missions, each with its own bit of the story in order to save the world. As these missions are completed the player character will encounter beasts, other players and so forth which he/she will have to fight or get away from with the use of weapons, abilities and so on.

As the missions are completed bits of the story-line will be revealed eventually showing the big picture as some might say. The goal is basically to survive a bunch of mutants, beasts and sometimes even other players, in order to save the world by completing a bunch of missions and rebuilding Virginia. 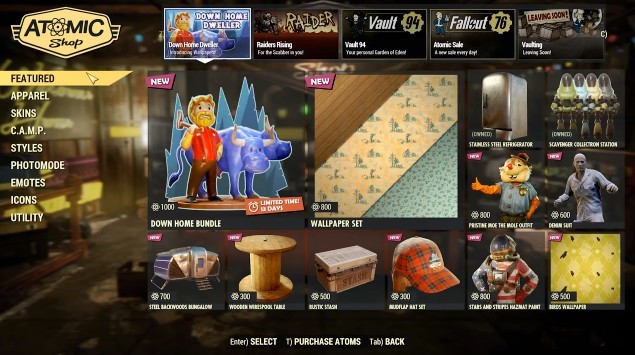 One can either play individually or in a party of up to three other players (total of 4 players) while exploring the world.

The game world known as Appalachia is extremely large, even 4 times bigger than that of Fallout 4 with tons to do and loads to fight.

Appalachia is based on Virginia a state in the US and it features a few key locations of that state such as; The Greenbrier, New River Gorge Bridge, Woodburn Circle, Camden Park, and even West Virginia State Capitol.

Fallout 76 also includes an enemy targeting system known as V.A.T. S that allows you to target specific or weak parts on an enemy making it easier to fight and kill them.

There are 7 character attributes that can be increased using skill points earned by leveling up as you play. By increasing the levels of these attributes, your character will be able to do certain things better or do more damage and so forth.

There are furthermore perks/ passive abilities that will give special gameplay bonuses. They are in the form of trading cards that can be merged and so forth.

Players can build settlements/ bases and so on while playing using C.A.M.P; however, you will have to protect it as monsters and other players can attack you there. It is a great way to store items and so forth. If you decide you no longer want to live there, you can just pack everything up and go no problem. 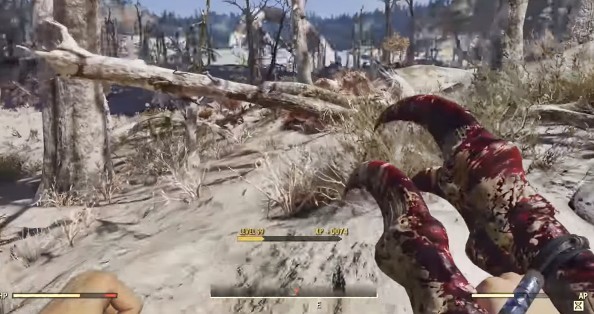 Players can get access codes to launch nuclear warheads, targeting almost any location on the map. This will clear that area completely allowing the player to find rare items and weapons. Be careful though, this will attract dangerous and strong players to the same area.

Traveling to teammates, C.A.M.P and the vault is free, but it will cost you to fast travel anywhere else. The price depends on distance level and so on.

If you die, teammates can revive you or you can re-spawn at a pre-selected point.

One does not have to compete in PVP (player vs. player). If you do not want to fight just turn and run; the damage done will be reduced so you do not die.

Real time events are a real thing and they will have to be completed in a certain amount of time. PvP will be disabled during this time, but some events focus on PvP. 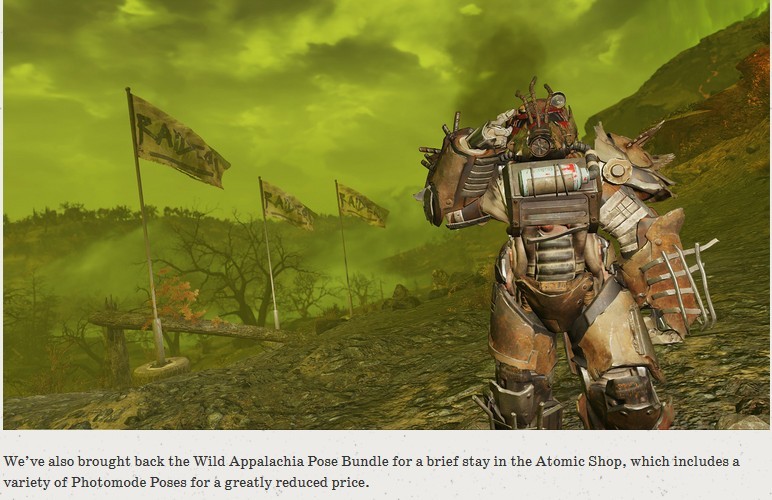 The game has amazing graphics from detailed grass to trees and buildings.

It is multiplayer so one can play with friends and other players online.

There are loads to do and one cannot get bored with the game or stuck waiting for something to happen.

The game allows you to build “settlements” which you will have to protect and so on.

There are other characters to interact with; it is not just you against everything else.

News updates to keep informed about updates, new challenges and so forth that can be found on the Fallout 76 Website. 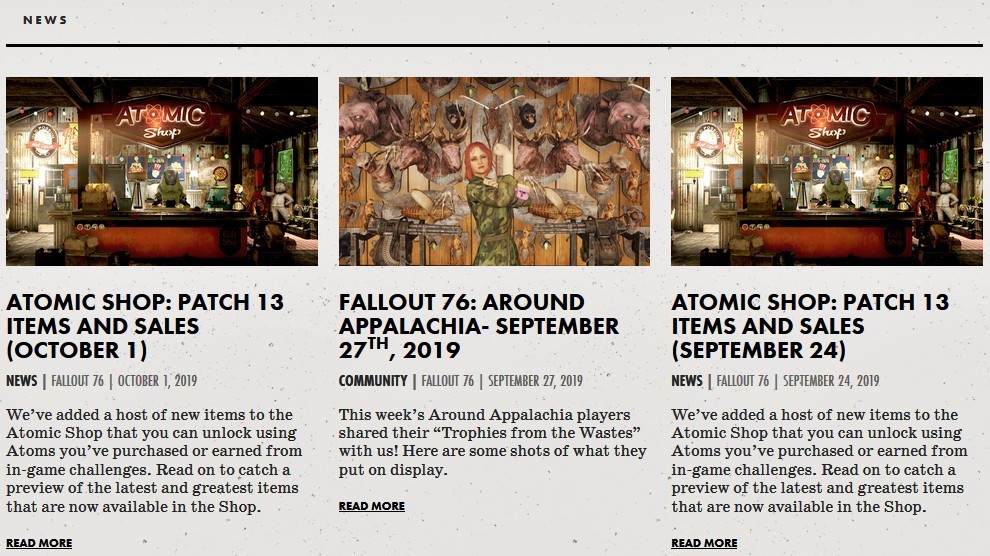 Numerous technical issues in the game.

The weakest storyline in role-playing-game history.

Feeling of being detached during quests. 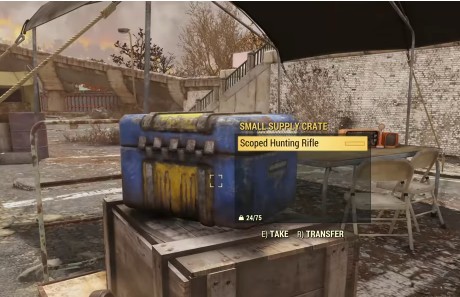