Jurassic World was a great movie, but is the game that was based on it, great too or just a way to ruin the entire franchise for you? Well, in this Jurassic World Evolution review, I will not only divulge important info about the game but will also determine if it is anything like the movie. So just hang in there a little longer and we will find out.

The game does not include many graphical scenes. Yes, the dinosaurs can kill each other or humans if they were to get loose, but blood is basically nonexistent and bodies disappear after a few seconds. Feeding carnivores is much the same, basically, no blood and the carcass disappears.

The game’s violence rating is extremely low as the only violence present, is when dinosaurs fight or when they hunt. As previously stated, they can only kill people if they are let loose or one another if they are put in the same cage with a dinosaur they do not get along with.

The game does not include any foul speech what so ever and drugs do not exist either. The only weapons present, are the “dart guns” rangers use to capture dinosaurs that have escaped or to cage one that is being shipped/moved.

The game has multiple ways of playing so giving it a specific tag can be rather complicated. When you play as a ranger, driving around and so forth, then the game is in first person shooter. One can also toggle third person view, to get a better look at whatever is in front of you; however most of the game is played from a sky point of view, like most other city building games. One hovers far above the city/park, building away and having fun.

Unfortunately the game is offline only with absolutely no online modes. There are no multiplayer options or even a way to get friends to visit your park.

Internet access is however needed for updates, as the game still gets new dinosaurs and so forth with each new version.

The average price for the standard edition of the game is $49.99; however the price can differ depending on a few things. The price you pay for the game can be influenced by, which edition of the game you chose, the packs that go with the game, which store it is bought from and for which platform. 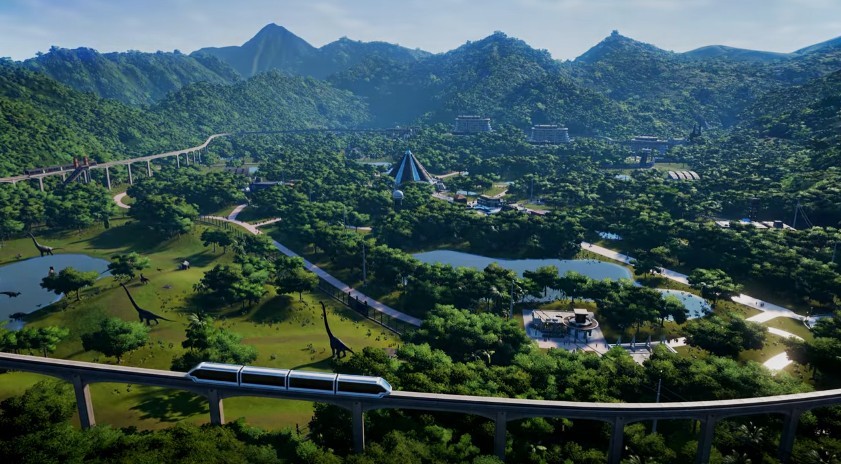 The game is only available on the following platforms:

DirectX 11 will also be needed along with Windows 7 64-bit or better.

Ever just sit and wonder what it would be like if you could build a dinosaur park, well now you can find out, with this video game based on the Jurassic World movie, which was released in 2015. The game was build so players could build their own Jurassic World, but ones that actually work and do not end with bunches of people dying.

The goal of the game is quite simple; however, it differs for some players.

Some will play the game with the goal to create the most amazing park that they possibly can. They can choose a difficulty level and a map to begin. There will be small missions to complete, if “career mode” was the option, and these missions will help further the park more efficiently. For others who play; having fun is the main goal, and they are not interested in the park fails or not. Either way, the game stays the same.

There are a bunches of missions to complete as the game goes on. These missions give XP or other rewards.

Dinosaurs are not all available at the same time; they have to be unlocked with levels and so forth.

Do not just build as you please, money is limited and earning it is very important, especially for a successful park.

Make sure the enclosures are perfect, lose dinosaurs are a very big problem, mainly for the visitors. 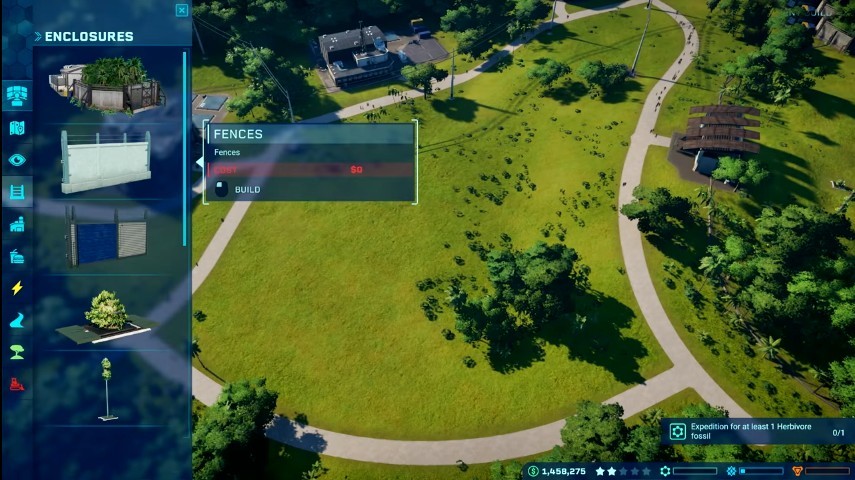 The game offers a boatload of different dinosaur species, carnivores and herbivores alike. Each species of a dinosaur even has its own different types of skins that go along with the biomes that they are from.

Each dinosaur species has different motions or actions specifically designed for them, whether it be the way that they eat, drink, walk or hunt.

The game also features bunches of different buildings, each with their own purpose. Some are restaurants and other gift shops. Everything one could find in a dinosaur park.

The game is based on the Jurassic Park movie franchise, Jurassic World in particular and it actually comes quite close to it.

Dinosaurs have different behaviors based on the movie and nature. Some run away while others fight.

Dinosaurs will fight other species or their own if they were a territorial breed. They will also hunt and kill park visitors if they were to escape, which is also a possibility.

The player can drive around in ranger vehicles getting up close to dinosaurs and exploring their park. They can also dart the dinosaur if need be. 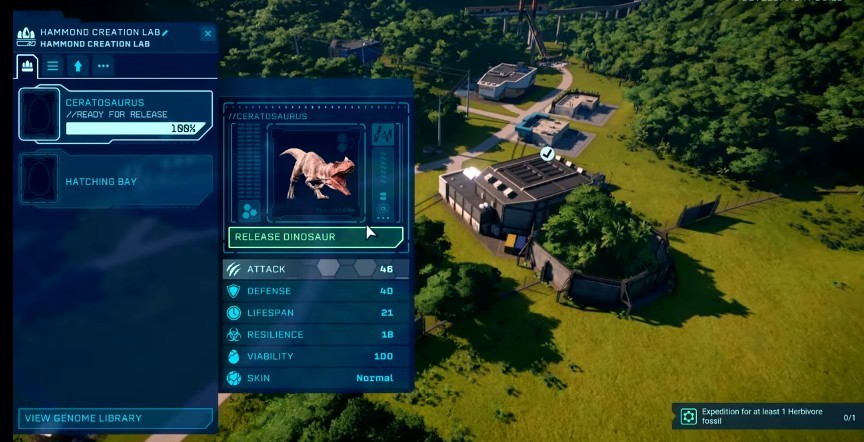 Loads of different dinosaur species to choose from when building the park of your imagination.

They give you a bunches of different options in buildings and so forth.

Amazing game graphics, from the biggest building to the smallest tree.

Ability to build cages the way you want. They are not set options.

The game designers have outdone themselves, with each dinosaur species having pretty much their own movements and behaviors.

The sky is the limit. Maps are large, and if your parks income is stable, you can just keep going and going. 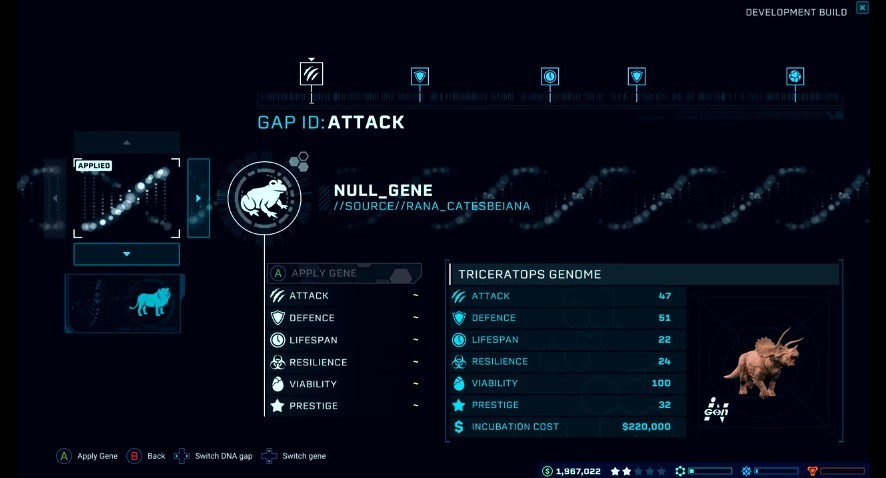 Almost all the Dino species do not get along, even some herbivores that are supposed to be able to live coherently.

Getting the park right and working can be a very difficult task, especially for beginners.

Some dinosaurs are only available with certain additions or packs, some of which can cost extra. 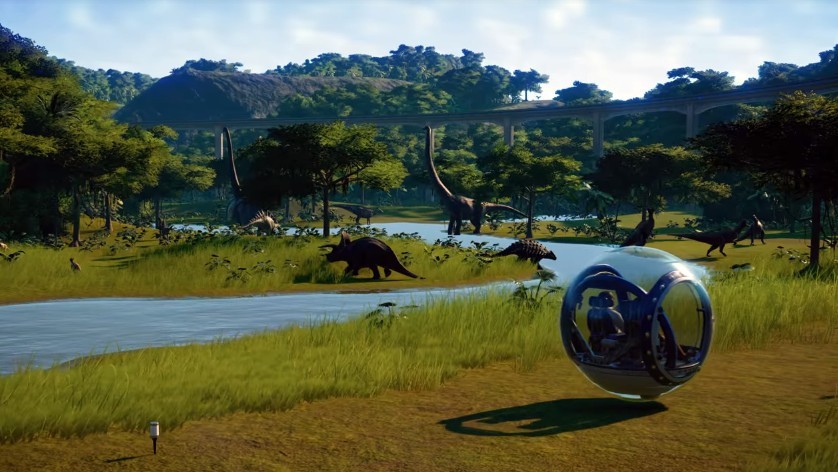